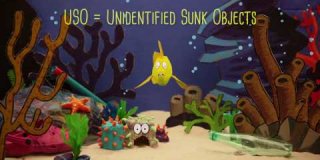 This video, created for the Blue Science, Blue Growth Event (8 February 2017), outlines the damage being inflicted on our oceans, what EuroMarine is doing to help and how you can also play a role!

EuroMarine is a bottom-up marine science network with over 70 member organisations working together to advance and promote innovative marine science. This video was shown at an event in the European Parliament entitled "Blue Science for Blue Growth, EuroMarine: connecting ideas and people" to highlight the importance of the ocean in our lives and the efforts of EuroMarine scientists to work towards a "Blue" future.

Subtitles are now available in three languages: English, French, Italian and Slovenian. Other languages will be added. To access the subtitles please click on the "cc" button on the bottom right of the video.

EuroMarine (2011-2013)  is an FP7 coordination action aiming at developing and implementing an agreed framework for the long-lasting and durable co-operation between the 3 FP6 marine Networks of Excellence Marine Genomics Europe (MGE), MarBef and EurOceans in order to achieve further integration of marine research in Europe.

The rationale for establishing an integrated platform of European marine research networks of excellence (EuroMarine) is to respond to the ever increasing need to develop an integrated and multidisciplinary approach to pressing research questions and problems. At present there are several high profile marine infrastructure projects that have been established on the roadmap developed by the European Strategy Forum for Research Infrastructures (ESFRI).

In a sense these ESFRI Roadmap projects represent the “Hardware” that enables high level science to be carried out with state of the art infrastructures. In contrast rather few programmes are being established that have the ambition to harmonise and integrate the science, the knowledge and ideas developed by scientists that might be called the “Software” that can be tested and proven by experiment using the ESFRI hardware.

EuroMarine aims to provide such a roadmap for marine science by connecting existing marine biological research institutes, which were members of the former marine NoEs and located across the continent, into a united organization with common visions and strategies. In this way Europe will take a leading role in structuring and driving forward marine biological research and technical development.

This will involve planning for the mutualisation and coordinated development of common strategic research objectives, shared training and education programmes and, where appropriate, common funding schemes. Important overarching objectives for EuroMarine will include acting as a forum to establish and catalyze a vigorous high level scientific community that will be the primordial motor of new high quality research as well as acting as a bridge between policy makers and stakeholders in Europe and relevant Commission DGs, ERAnets and other relevant and cognate agencies, institutions and NGOs.

While the formal partnership for EuroMarine is small, as is essential for a workable two years coordination project, the partnership is representative of all partners that comprised the former FP6 Marine NoEs.

This proposal focuses on all issues that need to be solved in order to prepare a memorandum of understanding to launch the establishment process for The EuroMarine Consortium. We thereby ensure proper embedding of EuroMarine into the fabric of European scientific, ethical, legal and societal frameworks. The expected impacts of EuroMarine will go way beyond the field of marine biology/science, significantly increasing the scope of diverse research and industrial applications, enhancing dissemination of knowledge to policy-makers and the general public, and last but not least, enhancing competitiveness of European research and industry in a global context.