Four members of the DIPO team (Daniel, Adriana, Dominique and Margot) and two members of the RCC (Ian and Priscilla) are currently participating to the Green Edge sampling which consists of field campaign in Nunavut and of a campaign onboard the Canadian ice-breaker Amundsen. You can follow our adventures on the Green Edge blogs.

After the long winter night, the sudden brightness

A large fraction of the Ocean in the Arctic is covered by ice in the winter. Very little light penetrates under the thick ice recovered by snow during the long polar night. Still phytoplankton, tiny unicellular algae a few 1/1000th of millimeters (1/1000 mm is called a micron) in size and which is at the base of arctic marine food chains, is present in these cold and dark waters.

Phytoplankton organisms are primarily photosynthetic: using light energy, they transform atmospheric CO2 into carbon compounds such as sugars. Many different groups of algae compose the phytoplankton. Diatoms are large cells from 20 to 100 microns protected by a glass-like silica covering displaying intricate ornamentation, dinoflagellates are smaller cells with two flagella, which allow them to move through the water, coccolithophorids are covered with calcium carbonate plates.

How does the phytoplankton community adapt the periods of nearly darkness in the arctic waters? How phytoplankton changes as the snow and ice melt, and the waters gets illuminated which ultimately lead to a bloom of cells that develops at the ice edge?

These are the questions that a group of scientists from the Biological Station of Roscoff in France (Daniel Vaulot, Ian Probert, Adriana Lopes dos Santos and Priscillia Gourvil) and from the Université Laval, Takuvik, in Québec (Connie Lovejoy) are going to address. During three months we will relay each other to sample both the water column and the ice just above it to determine what is the succession of phytoplankton communities that occurs between the end of the winter and the summer.

For this, we use a range of different techniques that allow to count the phytoplankton and assess its composition. One of these techniques is called flow cytometry. It allows to count the abundance of cells. We will also determine DNA sequences that allow us to assess the genetic composition of the community, since each phytoplankton species has a specific DNA signature. The development in the last years of high throughput DNA sequencing allows to get several tens of thousands of sequences for each sample and therefore to determine quite accurately the list of phytoplankton species present. Finally, the team is isolating live cultures of the different types of phytoplankton that will allow to study the most important species in the laboratory. These cultures will be incorporated into the Roscoff Culture Collection (http://www.roscoff-culture-collection.org/), a “library” of living organisms, that hosts more than 3,500 strains of microalgae and distribute them world-wide to researchers and private companies that may have applications for them (e.g. for biofuels or aquaculture feed).

The first sampling period during early May revealed that while the ice in contact with the water is dominated by large diatoms (Figure 3 bottom), the water contains very few diatoms but is dominated by dinoflagellates (Figure 3 top). Many dinoflagellates are either heterotrophic (i.e. they do not need light) or mixotrophic. In the latter case, they can change their metabolism as a function of the environmental conditions. When light is in short supply they become heterotrophic and feed on small preys such as bacteria and as light increases they become photosynthetic. This ability to switch between different mode probably explain their presence in the water at this period of the year. We expect this group to become less and less important as the ice melts and the light increases and to be replaced by diatoms that are dominating the ice edge bloom. This is only by following closely this phenomenon that we will have an idea how these cells behave and which groups, over time, will sustain life in these waters. 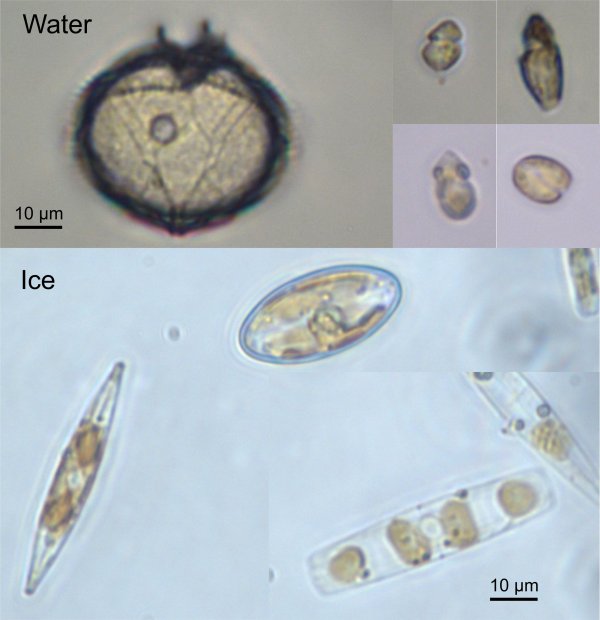 Green Edge - Incubators on the Amundsen

Green Edge - What we are doing at the ice camp