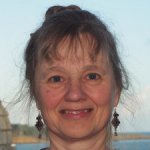 I am studying the adaptations of invertebrates to constraint environments, such as deep-sea hydrothermal vents and cold seeps, which are extreme environments. Indeed, they periodically put sedentary fauna up to lacking oxygen in their close environment, and to be flooded with sulphides or methane emissions, which are respectively inhibiting the respiratory chain and an asphyxiating gas  To understand the mechanisms enabling their adaptation to hypoxia, I analyse their gills and the diversity of their respiratory pigments. To resist to sulphides and/or methane, some species house in their gills, bacteria able to transform these gasses, as carbon sources into sugar, for the benefit of their host. My aim is to understand how the host-symbiont relationship works, by studying cellular mechanisms (recognition, multiplication, apoptosis…), that may regulate symbiont densities. I use cell markers and diverse microscopy techniques.

Associate Professor from Sorbonne University at the Station Biologique of Roscoff since1988.
Teaching takes a great part in my activity. I am member of the educational board of the Master in Marine Sciences of Sorbonne university, and local correspondent to the international joint Master program of Sciences in Biological Resources (IMBRSea), and responsible organizer of 4 teaching units of Sorbonne University:

Interested in adaptations of the invertebrates to harsh environments, my research work aims to find clues to answer the two main questions:

1- How do the animals cope with oxygen lack (i.e. hypoxia)?
2-How do they cope with sulfides and/or methane, by regulating their sulfo-oxidizing or methanotrophic symbionts?

Lately I co-supervised two pHDs on each of these questions:

1- Structure and function of respiratory pigments in vesicomyid bivalves:
2008-2011- Thesis of Carole Decker (in co-supervision with Dr. Karine Olu, IFREMER): “Diversity, ecology and adaptation of vesicomyid bivalves from reduced environments of deep-sea continental margins." Co-funded by région Bretagne forIFREMER and the TOTAL Foundation.

2017- Supervision of the post-doctoral work of Dr. Arunima Sen in the frame of the collaborative project SIBO about symbiotic Siboglinid worms from cold seeps in the Norwegian Arctic, aiming to identify the species and to characterize their symbionts.

2011- WACS – West African Cold Seeps, IFREMER-cruise, 27th January to the 16th February 2011. Study of Siboglinid annelids and Vesicomyid bivalves on the cold seep sites of the West African Margin, off the Congo canyon.

2010-MESCAL- Colonization and adaptation strategies to extreme hydrothermal environments.
Sampling cruise, 9th -29th of May 2010 at the hydrothermal vents of the East Pacific Rise at 9-11°and 13°North.

2007- MEDECO- MEDiterranean margins’ cold seep ECOlogy : 2nd -30th November2007.
IFREMER-cruise in the frame of the European project HERMES (Hotspot Ecosystem Research on the Margins of European Seas) on the mud volcanoes of the East Mediterranean Ocean.

2006- VICKING – On the cold seeps of the Norwegian Sea, 20th May- 9th June 2006.
IFREMER-cruise in the frame of the multidisciplinary European program HERMES (Hotspot Ecosystem Research on the Margins of European Seas).